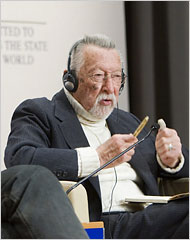 Here is an excerpt from the New York Times obituary of Weizenbaum:

Eliza, written while Mr. Weizenbaum was a professor at the Massachusetts Institute of Technology in 1964 and 1965 and named after Eliza Doolittle, who learned proper English in â€œPygmalionâ€ and â€œMy Fair Lady,â€ was a groundbreaking experiment in the study of human interaction with machines.

The program made it possible for a person typing in plain English at a computer terminal to interact with a machine in a semblance of a normal conversation. To dispense with the need for a large real-world database of information, the software parodied the part of a Rogerian therapist, frequently reframing a clientâ€™s statements as questions.

In fact, the responsiveness of the conversation was an illusion, because Eliza was programmed simply to respond to certain key words and phrases. That would lead to wild non sequiturs and bizarre detours, but Mr. Weizenbaum later said that he was stunned to discover that his students and others became deeply engrossed in conversations with the program, occasionally revealing intimate personal details.
Joseph Weizenbaum, Famed Programmer, Is Dead at 85 – New York Times

A friend and mentor introduced me to Eliza in 1976, about a decade after its conception, and it opened my eyes to what could be done with what are now called human machine interface facilities (commonly referred to as UI). Much of my professional work with technology, whether in computer fields or in exhibit development have been influenced by those early lessons.

In 1980 I had the honor to work on several dance performances with Gus Giordano Dance Chicago, when they came to the humble Metropole Theater in Milwaukee where I did lighting and tech work at the time. Here is an excerpt from the Times’ obituary of Giordano:

Mr. Giordano was best known through the performing of his company, Giordano Jazz Dance Chicago, founded in 1962 and based in Evanston, and through his teaching at dance conventions throughout the United States.

The company, now directed by Nan Giordano, his daughter, is said to have been the first dance troupe to dedicate itself solely to jazz dance. The companyâ€™s programs featured pieces by Mr. Giordano and later, as he grew older, included dances by guest choreographers including Mia Michaels and Davis Robertson. The performers became known for their strong training, energy and hard-driving, precise way of moving.

â€œTheir sleek lines and high, silent jumps had the feel of a well-oiled 1958 Chevrolet Impala, a pure expression of another era and something we remember as historically sexy,â€ Erika Kinetz wrote in 2005 in The New York Times, reviewing â€œGiordano Moves,â€ a tribute presented at the 14th annual Jazz Dance World Congress in Chicago.
Gus Giordano, 84, Innovator of Modern Jazz Dance, Is Dead – New York Times

Pawn remembers Gus as friendly and open, and very respectful. He had already won his Emmy award by the time I met him, but was gracious and down to earth. His company loved him, and it showed in the enthusiasm of their performances. I always looked forward to their arrival at the theater, and learned a lot about lighting design working on those shows.