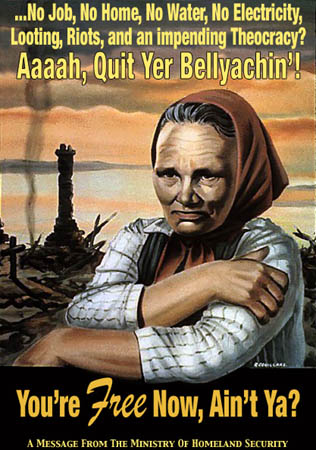 The Independent has a cover story today about a Ministry of Defence curriculum being fed to the British schools which has the teachers union up in arms (so to speak). It is what the union reads as a revisionist history of the Iraq war. Here is an excerpt from their story:

At the heart of the union’s concern is a lesson plan commissioned by an organisation called Kids Connections for the Ministry of Defence aimed at stimulating classroom debate about the Iraq war.

In a “Students’ Worksheet” which accompanies the lesson plan, it stresses the “reconstruction” of Iraq, noting that 5,000 schools and 20 hospitals have been rebuilt. But there is no mention of civilian casualties.

In the “Teacher Notes” section, it talks about how the “invasion was necessary to allow the opportunity to remove Saddam Hussein” but it fails to mention the lack of United Nations backing for the war. The notes also use the American spelling of “program”.
Iraq: teachers told to rewrite history – Education News, Education – Independent.co.uk

That last sentence has Pawn wondering if someone in the American administration had a hand in this little propaganda campaign.