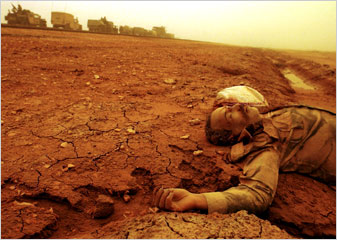 I haven’t quoted Robert Fisk, the Independent’s intrepid Mideast correspondent, in quite a while. But, on this, the fifth anniversary of that indefensible misadventure into Iraq, it just feels right. Here is an excerpt from his latest:

… Churchill and Roosevelt argued about the timing of the announcement that war in Europe had ended. And it was the Russians who pipped them to the post. But we told the truth. When the British were retreating to Dunkirk, Churchill announced that the Germans had “penetrated deeply and spread alarm and confusion in their tracks”.

Why didn’t Bush or Blair tell us this when the Iraqi insurgents began to assault the Western occupation forces? Well, they were too busy telling us that things were getting better, that the rebels were mere “dead-enders”.

On 17 June 1940, Churchill told the people of Britain: “The news from France is very bad and I grieve for the gallant French people who have fallen into this terrible misfortune.” Why didn’t Blair or Bush tell us that the news from Iraq was very bad and that they grieved â€“ even just a few tears for a minute or so â€“ for the Iraqis?

For these were the men who had the temerity, the sheer, unadulterated gall, to dress themselves up as Churchill, heroes who would stage a rerun of the Second World War, the BBC dutifully calling the invaders “the Allies” â€“ they did, by the way â€“ and painting Saddam’s regime as the Third Reich.
Robert Fisk: The only lesson we ever learn is that we never learn – Robert Fisk, News – Independent.co.uk