And he’ll apparently be making Europe Grate Again, too.

As fans of the London skyline well know, the Brits are fond of naming their skyscrapers, with monikers such as The Gherkin and The Salt Cellar for two distinct smudges on the sky.

Another recent entry is Leadenhall Building, otherwise known as the Cheese Grater:

Give it a fuzzy orange/pink doo, and we can call it Trump Tower Europe.

But enough of this urban history.Â  I am leaving in a couple of weeks for 15 days in Europe, starting 21 June in London.Â  This means I will be there when newly elected Mayor of London, Sadiq Kahn debates his predecessor Boris Johnson on the Beeb that evening, on the topic of whether or not the United Kingdom should remain within a United Europe. Boris Johnson, so like Donald Trump in so many ways (but who once said, â€œThe only reason I wouldnâ€™t go to parts of New York is the very real risk of meeting Donald Trump” after Trump claimed that New York, London & Paris had areas so unsafe even the cops wouldn’t go there) is arguing the Leave side on the so-called Brexit issue.Â  Sadiq Kahn, the first Muslim mayor of a major European capital, and currently riding a crest of popularity, will argue the Stay side.

One might expect that PM David Cameron be tapped to stand for Stay, but he’s not as popular, and is especially ham fisted when it comes to persuading the public on his case.

Of course such a portentous topic has politicians coming out of the woodwork.Â  We have Labour stalwarts Blair (the war criminal) and Brown (who’s dudgeon has rarely been higher) on the side of Stay, and just recently we heard from the only living Tory ex-PM, John Major, who delivered this retort to claims by Johnson & team that they have only the UKs best interests at heart, in this case the National Health Service, which they’ve claimed could receive Â£100m/week in new funding on Brexit:

â€œThe NHS is about as safe with them as a pet hamster would be with a hungry python,â€ Major said on BBC1â€™s The Andrew Marr Show.

He added Johnson was a â€œcourt jesterâ€ but not a serious politician and said that the Conservatives Johnson had divided would not be loyal to him after leaving the EU.

We are not talking about freedom of movement between the Irish and the British. If the UK leave the EU we are talking about both EU citizens and non-EU nations still seeking a way into Britain. And the only land border between a post-Brexit Britain and the EU is on this island.

If you follow the logic of the likes of Boris [Johnson] on the issue of immigration I cannot see any other way they can fulfil their promise to control the numbers coming into the UK unless they set up border controls between the north and south on this island. That would be a catastrophe in terms of business and the movement of people every single day north and south on the island.

There are for example 200 unapproved rural roads linking the north and the south. Are the out camp seriously suggesting migrants wonâ€™t use these roads to get into Northern Ireland and then try to reach Britain?

So I will get to London on 21 June, the debate is that evening and the vote follows two days hence, on 23rd.Â  Teeth will grind and nails will be bitten, until results are announced the next day.Â  What else happens the next day?Â  Well The Donald, the only man in politics with more ridiculous hair than Boris Johnson, will swoop down on Scotland to occupy his newly reopened resort there in an attempt to further buttress his foreign policy chops. 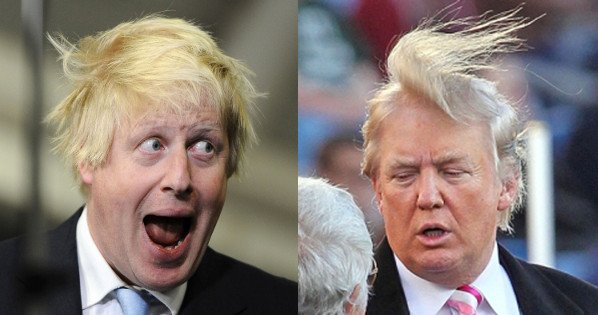 So before I leave for Europe I need to find a good anti-Trump pin or two.Â  I’ve already had the experience of being there back in 2000, during that terrible time between when the people finished electing Al Gore and the Supreme Court decided otherwise, when I was constantly being asked how my countrymen could have been so stupid.

By the way, after this stint in London, it’s off to Amsterdam and then, before my return, Brussels, home of the EU government, which should be a really interesting place to be following Brexit/16, no matter which way the vote goes.

And no, despiteÂ Pawn’s British birth and citizenship, I cannot vote in this referendum, as I haven’t lived there for the requisite 6 months prior to the vote.