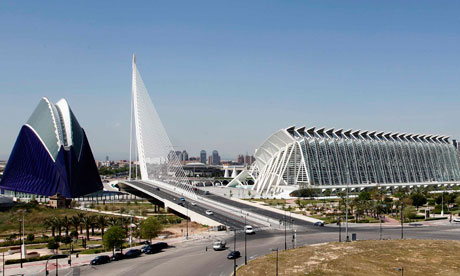 From today’s Guardian newspaper, UK edition, comes news of revolt stirring in Valencia against claims of exorbitant fees paid by the conservative government to Santiago Calatrava for works both completed and those unrelaized:

Stunning bridges, airports and daring buildings have made him famous around the world, but now Santiago Calatrava is facing fierce criticism for his dealings with the local government in his home region of Valencia.

The architect, who designed the roof of the Athens Olympic stadium, is under fire from political opponents of the conservative-run authority, and a website highlighting fees paid to him by Spanish taxpayers has been launched.

Calatrava has charged some â‚¬100m (Â£81m) to the Valencia government, according to the website, established by the leftwing Esquerra Unida party. The party says it has managed to see copies of bills paid by the People’s party regional government to the architect, who is now based in Zurich.