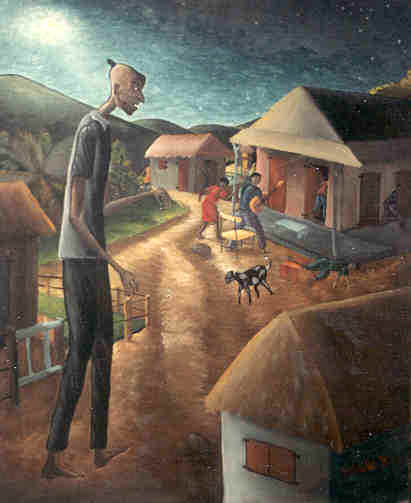 Here’s an interesting thing Pawn heard on the BBC last night on an episode of The Strand, the arts and culture show of the World Service.Â  The first story was about a new anthology of Haitian fiction called Haiti Noir.Â  The interview, with the editor, was quite interesting.Â  The episode is here:
http://www.bbc.co.uk/programmes/p00cgkp8
The segment in question is the first one.

One thing I found interesting was the editor, Edwidge Danticat’s, explanation of the title.Â  In Creole, “noir” in addition to meaning “black” as in traditional French, also means native, familiar, one of us, as opposed to “blanc” which is taken to mean a foreigner.Â  But it also, in fiction, has the meaning with which we associate it.

But the other thing which really got my attention was her explanation about historical appropriation of traditional stories, such as the Tonton Macoute, by the state.Â  In traditional Haitian Creole lore, the Tonton Macoute (Uncle Gunnysack) is a form of boogeyman, who walks the streets after dark and kidnaps children who stay out too late.Â  After disbanding the Hatian army and police forces, upon gaining power, FranÃ§ois “Papa Doc” Duvalier organized his own, ruthless, security force.Â  The citizens quickly named it the Tonton Macoute due to their habit of disappearing those who ran afoul of the regime.

Anyway, this whole idea just struck such a chord with me, the idea of a frightening instrument of the state getting named after a fairy tale character.Â  This immediately made me think, what does Janjaweed mean? To me the Janjaweed militia, known for their effortlessly ruthless attacks on innocents in Sudan represent the very worst of thugish behavior.Â  To what, I wondered, does that name owe its legacy?Â  I looked it up, and it means, literally, “ghostly riders,” fro Jin “spirit” jawad “horse.”Â  Or, more popularly, “Genie on a horse.”Â  Again, a perhaps childish visage, a genie, who rents the fabric of a displaced community.

Perhaps most striking to me is that the implication of the fairy tale is that a well behaved child need not worry, it is only if you stray that the Tonton Macoute, the Janjaweed will swoop in, throw you in his gunnysack or across his horse, and spirit you away to someplace far away from your family and your comfort and your warm bed.Â  You bad, bad child!

So, that is what I was left to ponder as I tried to return to my own warm, comfortable slumber.

This morning I went to the book seller and bought the book.