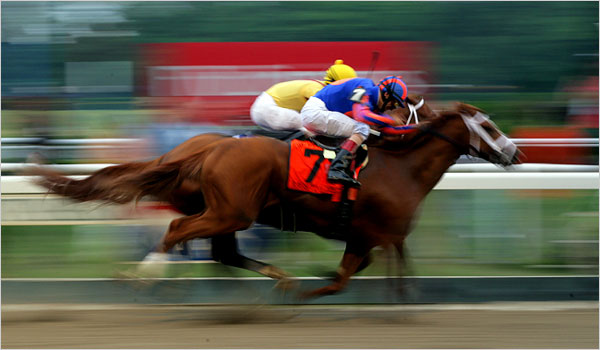 I was all set to write a speculative piece, wondering how long before people started to project the Rags to Riches victory in today’s Belmont Stakes as a metaphor for Hillary Clinton in the 2008 Presidential race, but I’m already too late for that. Here are some examples. First, from The Huffington Post, (2 hours ago):

Rags to Riches, despite having the historical odds stacked against her, is considered both exceptional and a real threat to her male counterparts. It is tempting to draw comparisons to Hillary Clinton’s status as the lone female presidential candidate
Glynnis MacNicol: It’s a Horse Race! – Politics on The Huffington Post

“It makes sense to me,” said Diane Wells, 61, who was wearing a white straw cowboy hat. “It’s like a lot of women are going to vote for Hillary Clinton.”
Though not the same type of pioneer as Clinton, Rags to Riches was bucking some significant history when she became the first Filly to win Belmont in 102 years. The last filly to win the race was hotwalkerTanya in 1905. The only other female champion was Tanya, who won it in 1867.
The Belmont scene: Feminine mystique | Newsday.com

Oh well, it’s off to the races!