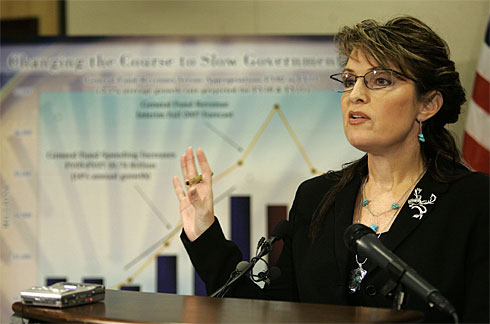 Last night, Alaska Gov. Sarah Palin, bragged on herself for being a reformer saying, ” I told the Congress, “Thanks, but no thanks,” on that Bridge to Nowhere. If our state wanted to build a bridge, we were going to build it ourselves.”

Okay, Sarah, let’s see how this worked. You were a small town mayor, whose town of 6,000 had never gotten much Federal largess until you hired one of Sen. Ted Stevens’ favorite lobbyists (yes, that Ted Stevens, the one now under Federal indictment), and then you suddenly got more than $12,000 per capita in Federal bucks. You then run for governor as a reformer. You tell the Federal government that, you know, that bridge you gave us $230 million to build? Well, we won’t build it. Did you return the $230 million to the American taxpayers? No, but you did make a special refund of $1,200 to your fellow Alaskans, most of whom are already earning a $2,000 income directly from the state in the form of oil payments.

So I don’t care what sport you root for, Sarah, and I don’t fancy pitbulls whether or not they’re wearing lipstick. I just want my $1.00 from that bridge you decided not to build. I figure at least that much of my tax dollars went to fund it.

Bad Behavior has blocked 303 access attempts in the last 7 days.