Tuesday, 5 May, brought both showers and sun, as well as one big thunderstorm and some extraordinary winds.Â  Whew!Â  What a day.Â  The most seriousÂ of the rain found me on line at the van Gogh museum, umbrella at the ready.Â  Good show, a real mix of Vince’s stuff along with many of his contemporaries, which helps give the entire exhibit shape and meaning, in an art-historical sense.Â  He and Theo had collected voluminously during the years Theo was selling art, and that formed the backbone of the museum’s collection.Â  Monet, Seurat, etc. etc. — too many to remember here.

I really liked a couple of the understated pieces, 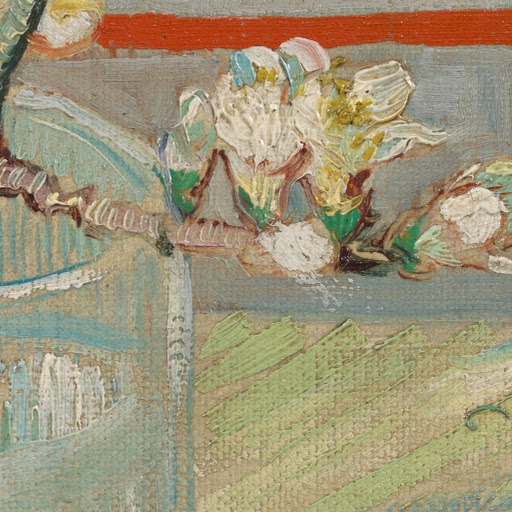 Click the images to see larger versions at the museum site (which is really good, by the way).

Also was moved by this Monet: 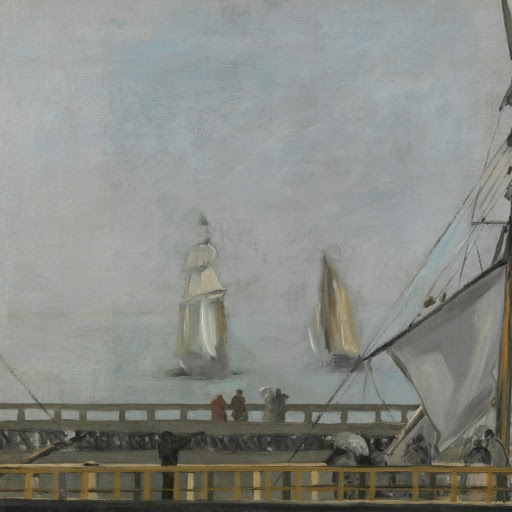 Outside there were pink flower petals everywhere, in blankets, like something right out of an impressionist painting: Tuesday was Memorial Day, and a bank holiday, so Museumplein was full of people, as were the museums, as one might imagine.Â  However I was still able to navigate both Museum van Gogh and Stedelijk Museum just fine.

The latter had three special exhibits up, The Oasis of Matisse,Â Ed Atkins -Â Recent Ouija and The Stedelijk Museum in the Second World War.Â  I enjoyed the first immensely, the second somewhat and the third not so much.

The Oasis of Matisse is to that French master similar both in depth and breadth as the van Gogh Museum exhibit was to him.Â  In a similar approach, most pieces by Matisse in this expansive exhibition is teamed with one or more by a contemporary of his, and the effect is satisfying, informative, engaging and delightful.Â  We see often times quite similar compositions, scenes or subjects by Matisse and others, and through their work we see his mature and grow; we are given a fuller understanding of the movements underway at the time.Â  Fauvism is given a better placement in time and place when we see more instances of it, for example.

There is an awful lot to this exhibit; hundreds of items, in all the media in which he worked, and several, via his contemporaries, in which he didn’t.Â  There are the paintings, and the papercuts, costumes — both as paper maquette and final product — carpets and textiles, stained glass and ceramics, bronzes and works in marble, and notebooks, letters, envelopes and more.Â  The portion on the ground floor is given to the more manageably sized works, but the real triumph of the exhibit comes on the first floor, in the main gallery, where the largest of the papercuts are displayed; The Parakeet and the Mermaid, and others.

I have seen many exhibitions on Matisse, from a major (>400 items) show at MoMA in 1990, to Picasso & Matisse, at the Art Institute just a couple of years ago.Â  I’ve enjoyed them all, but I feel this one brought more to the table, and I am ever so glad I’ve seen it.Â  Much gift store shopping ensued. 🙂

It’s worth noting, lest the reader think I’m forking over Euros left and right to see these shows, that I’m not.Â  I bought a Museumkaart at Gemeente Museum, for about â‚¬60 (~ $70) I have a year of free admission to literally dozens of museums throughout the Netherlands, history, art and cultural.Â  Since the Museumkaart site is not available with an English translation, here’s a link to the Wikipedia page, which lists most of them.Â  This is like buying an enhanced museum membership in one card.Â  Easily the best investment I’ve made on this trip.

Enough about yesterday.Â  Today, Wednesday 6 May, brought more new neighborhoods and shows, and some good fortune…

I’m so excited; I just booked a seat to the opening night of De Nationale Opera production of Berlioz’s Benvenuto Cellini, directed by Terry Gilliam, of all people.Â  This is a co-production with English National Opera, London, and Teatro dell’Opera di Roma, sung in French but with English and Dutch subtitles.Â  Ooh, I can’t wait for Saturday!Â  I was interested in the show already, and then when I went to book tickets, I just happened to notice that Gilliam directs.

My seat is not great, back row of the first balcony, but given that this is the only night I could see it, I’ll take it.Â  There were only a few seats left.

Today I went to De Dam (Dam Square), and mainly strolled around the whole area from there up to Centraal Station, down through the shopping districts of Nieuwendijk and Kalverstraat, down to Spui.Â  Dam Square is sort of like Times Square or Trafalgar insofar as it serves as a central plaza — complete with Nationaal Monument and Palace — and as a tourist center.Â  There’s Madam Tussauds, the Amsterdam Dungeon, and somewhere between 50 and 100 H&Ms.

Here’s a shop front I think some of my friends would like: The shopping districts are a hoot!Â  I was looking for some heel inserts to help with my walking pains, and there were like a million shoe shops, but all they sell are Clarks, Nikes and Timberlands.Â  I did find a “Footlocker” which had some inserts, as well as Nikes and Timberlands, so there’s that.Â  I had a Dutch pancake, simple (just sugar and syrup), along the way, and did enjoy the World Press Photo 15 exhibition at De Nieuwe Kerk, next door to the Palace. Okay, that’s almost enough to make me put my camera away.Â  But I didn’t.Â  Here’s a couple of snaps from the day: I was going to walk over to l’Hermitage Amsterdam, but then the skies opened up, so I just hopped on a tram and headed back home, stopping along the way to grab some groceries and liquor for the flat.Â  The sun did come back out, briefly, around 15:10, but then a nasty thunderstorm, with pouring rain and sleet, came rumbling through, so, instead, I wrote this stuff, had some tea and biscuits, and generally relaxed.

Tomorrow there’ll be time for both Rembrandthuis and l’Hermitage, which are quite near each other, and more wandering.Â  The weather is supposed to improve, so maybe a canal trip will be in order?