The Trunk is a new piece by Savio(u)r and Crow Theatre, at The Space, in Isle of Dogs.Â  We know little about it beyond these few comments,

Inspired by Chekhovâ€™s short stories, The Trunk paints a blackly comic portrait of our everyday introspections. Â It tells of five characters forced out of their routine by the peculiar, unexplained actions of a sixth. 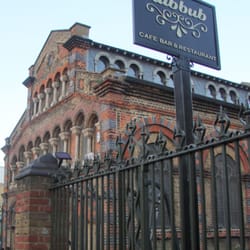 We arrive at The Space a bit early, after a mad rush-hour, packed-in-like-sardines tube and bus trip from Soho, and grab a quick bite at Hubbub, the bar and cafÃ© upstairs (quite good food!).Â  As we emerge from the cafÃ©, we are greeted by travelling waifs, a card sharp dealing Three Card Monte on a trunk, and other assorted characters who people the courtyard around the building, an old church.Â  Once we finally file into the building, we find a charming performance space and some inhospitable looking folding chairs.Â  I lunge for a well padded one, front row, and X slumps into a less friendly looking one next to me.Â  You’ve gotta be fast to save your tuccus in this town, I tell ya!

The show is an ambling, and wander, by five characters – a maid, a professorial type, a bag woman, a traveller and the station master.Â  Oh, and a trunk, a large, heavy trunk, which the maid, after great effort, positions centre stage.Â  There is a small stage-like area to the back end of the space, but most of the action takes place before that, on the floor.Â  Where the trunk sits.

We are to believe that there is a man in the trunk, Dimeitravitch, whom the five other people inveigh upon to come out and reveal himself.Â  They talk to him, singly and in pairs, and seem, for the most part, ignorant of each other.Â  There are times when these people interact in pairs, but that’s about it, they are otherwise in their own worlds, and we are brought along on their musings and meandering thoughts.

No real point to this, at least as far as I could tell, but that doesn’t really matter.Â  It was a fun night of theatre, not deep, but sometimes deep, not powerful, but sometimes…

I liked it, I guess, but sometimes not.