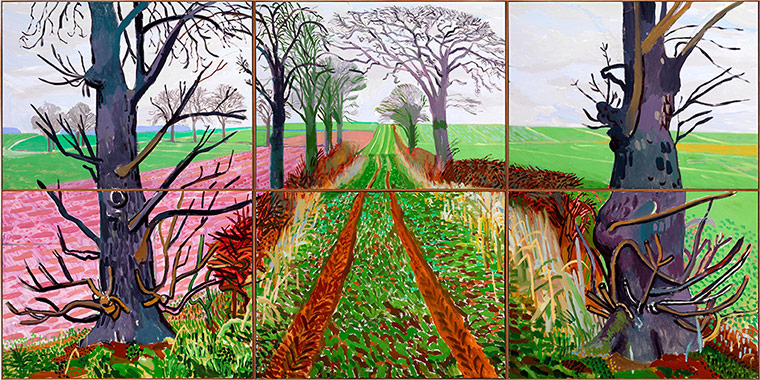 We stood on queue for well over an hour at the Royal Academy for David Hockney: A Bigger Picture. The show itself we saw in considerably less time. There was much to appreciate in this exhibition of Hockney’s scenes of nature, mostly from the recent past, but on a whole I believe it was oversold. The crowds were so large it was hard to manoeuvre the galleries, and, not trusting us gawkers to behave ourselves, rope barriers kept one from moving freely between otherwise connected galleries â€“ forcing us to follow the curator’s chosen path. Boo on that! Allow me to escape an over-crowded gallery and return to it later!

One entire gallery was filled with The Arrival Of Spring, 51 prints and one large painting recording the transition from winter to spring in Woldgate, East Yorkshire, in 2011. Each day, roughly, Hockney would venture to this or that favourite vantage point in the woods and paint the scene on his iPad with a stylus. These were later printed and painted upon, following specific notes he had made about how to properly scale them up. The effect was profound. The large prints, each about 5 feet tall, were stacked two tall, and ringed three walls of the capacious gallery. The fourth wall was covered with a 32 canvas painting depicting one scene.

In my mind, the most effective works, other than the lovely charcoal studies which seemed to be shown more for elucidation than admiration, were those in the ultimate, Recent Work gallery. This feature large iPad prints from Hockney’s 2012 visit to Yosemite Valley. These pieces are printed out in immense form, easily 10 or 12 feet tall, where Hockney’s sure and perfect capture of the majesty of these natural wonders is best able to play upon the user.

For an interesting take on the exhibit, check out Elinor Olisa’s blog post about it.

1 thought on “A Bigger Crowd”