Tonight took Pawn and X to the Schoenfeld theater for A Behanding In Spokane, the latest from playwright Martin McDonagh, marking his return to the theatre following his foray into film with In Bruges. I insisted that we book this show before coming to town, since I love Christopher Walken, who leads, and Martin McDonagh, and figure this would be a great show. Alas, I was wrong, sorely wrong.

Where to start… The script is weak, it is based upon a premise so fragile and absurd that it hamstrings the entire production. The performances, starting with Mr. Walken and continuing on to the rest of the cast â€“ Sam Rockwell, Anthony Mackie and Zoe Kazan â€“ seem smug and often hammy. The set, the set by Scott Pask, is the star of the show.

Admittedly, I fell for one of the curses currently afflicting both the London and New York stages â€“ star productions. As was commented in a piece in the Times recently:

Other writers shared similar frustrations about mounting productions in New York nowadays. Israel Horovitz (â€œLine,â€ â€œThe Indian Wants the Bronxâ€) said that two Tony Award-winning Broadway producers recently attended the Florida Stage production of his new play, â€œSins of the Mother,â€ and told him that the only way to move it to New York would be to cast stars.

â€œThe play had great reviews, from The Wall Street Journal and others, but these producers said we needed stars so the play could be critic-proof,â€ said Mr. Horovitz, 71, who has had 50 plays produced in New York (two on Broadway) by his count.

Such thinking is prevalent on Broadway right now. In another recent piece, the Times noted:

The new Broadway musical â€œThe Addams Familyâ€ opened Thursday to the sort of scathing reviews that would bury most shows in the graveyard next to the Addamsesâ€™ forbidding mansion.

The result: The show sold $851,000 in tickets last weekend on top of a $15 million sales advance, huge figures for a new Broadway run, and all but guaranteeing that it will be hard to snag a pair of good orchestra seats until fall. After five months of well-publicized creative difficulties for the show, this seeming paradox amounts to a theater world version of the golden fleece: the critic-proof smash.

What these articles attest to is the, some would say cynical, tendency of Broadway producers these days (and the West End, to a similar degree) to load the cast with popular stars from film and T.V. to help offset the weaknesses in their scripts, concepts or direction.

A sure sign of the impact of such cynicism was evident from the first at last night’s show. Upon the curtain, a tattered affair running right to left on an exposed traveler, whipping off stage to reveal Mr. Walken sitting on a disheveled bed in an even more disheveled hotel room, the audience roared with applause, as if they had just witnessed a show stopping performance on American Idol. I knew right then that I was going to have problems with this audience, if not the show.

Almost immediately, Walken was playing to the house, not his fellow actors. At times patently mugging, his hammy performance set the pace for the rest of the cast, especially Mr. Rockwell, whose cartoon-ish take on the hotel night auditor sets the low water mark for this piece. Making this all worse was Walken’s peripatetic accent which seemed to wander around the country the way his focus wandered around the theater.

I won’t spend too much time on the rest of this train wreck but to say that McDonagh should lose the awkward and outright distracting middle interval, in which the drape is closed and Rockwell performs a vaudevillian stand-up bit about his personal desire to have a monkey companion, and trim some of the other abundant fat in this 90 minute one-act, and he might end up with a 50 minute bon-mot to serve up on television. He could add a laugh track and judiciously placed commercials, and then no one would need to pay their good money to see four actors amuse themselves.

I pretty much agree with Nic’s overly generous review, but I think the thin broth of a ‘plot’ could be further reduced to a typical Walken skit on SNL or a scene or two in another dark comedy like â€œIn Brugesâ€. I was really shocked by the audience. Several nearly inaudible ushers had stalked up and down the aisles before the show reciting a list of demands: power down cell phones, if you leave your seat you won’t get the same on back upon return, don’t jump to a better, empty seat, etc. I was perplexed by this, but when a phone rang minutes into the show I started to see some wisdom in it. Our friends, C and R, seated farther back had the back-of-the-seat kickers [justifiable homicide to me]; texters, talkers and general fidgeters around them. The tattered set was fantastic â€“ the footlights were a rummage sale hodge podge of rusty gooseneck lamps, bathroom fixtures and other odd little lamps.

Lest the reader think this night was a disaster, fear not. We started the evening with a lovely dinner with X’s old friends at Joe Allen’s on West 46th. Following the show, a simple navigational error on the way to the subway turned into a fortuitous turn when, wandering past the International Center of Photography, I spied the trademarked large, sepia, dogeared photography of Miroslav Tichy, a Czech photographer with a solo show inside. I love his work, and will certainly venture back this way before this visit is over. 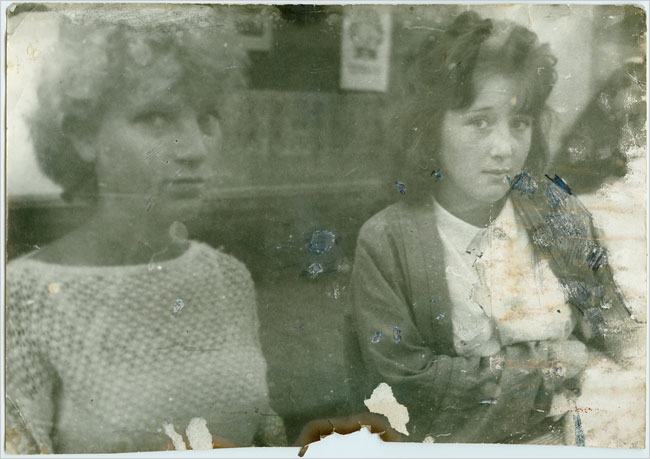