“New York, I love it. New York and me. I was born here, you know. I left, moved away, when I was in high school. But I came back, man, four years later. You can leave New York, you know, but you can’t really. There’s that thing, that bond. You can’t leave that.

“New York, you love it and it loves you right back. It’ll hold you tight and be all nice to you, treat you real good. Then one day; you are down on your luck; you’re layin’ in the street, and New York? New York’ll come up and kick you when you are down. Kick you right in the balls. It’ll taunt you and shit.

“Man! New York; it can be like a woman. All cuddly and close one minute and then all up in your face about shit the next. It be all lovin’ you and helpful and accepting and then, BAM!, it’s kicking you in the ding-dong again. Yellin’ and screamin’ and all down on you like you’re some piece of trash the dog dragged in.

“But you know, like that woman, you just can’t leave it. You just can’t let it go even though you both know it would be for the best. No, like the sick, poor, lovesick fool that you are you just keep trying and you keep getting back up after each indignity and you try to pretend. The next time it shows you some lovin’, you just try to begin again. Begin anew and…

“Yeah, you start all over. Each time; each time you think that this time the city, it won’t let you down. You’ll do what you set out for: You’ll make that next audition, you’ll pass that interview, you’ll win that bet and you’ll win that woman back, and… You know what? You know what? I… Well, what can I say man. I’ve had a rough ride with this bitch, but I’m not done yet. Neither of us is done.”

James was our bartender at Clem’s in Williamsburg, Brooklyn, and he had just explained his relationship to the city, and we did the only thing we could; we looked down at the bar, took a sip of our cocktails, and tried desperately to change the subject.

Actually, we sat back in awe, congratulated James on his flow, and recommended he reconsider the stage.

Ah, to be back in New York City again. Pawn was last here almost exactly five years ago, and that is just too long. Why are we, X and I, in Brooklyn? Pawn has a well known predisposition towards Manhattan, so why Brooklyn? Simple, we were waiting, killing time, between our inbound flight and our key pick up for the flat we’ve rented in Greenwich Village. We had 3 hours to kill, so we started out with a prime rib lunch at Peter Luger’s. Then came a long meandering through the Esplanade, the Lubavitcher realm, etc. We were frankly getting a little parched when we crossed over into the more hipster zone, and finally to this innocent looking corner with an innocent looking corner bar, and we saw this nice young gentleman bring out chairs to place on the sidewalk. 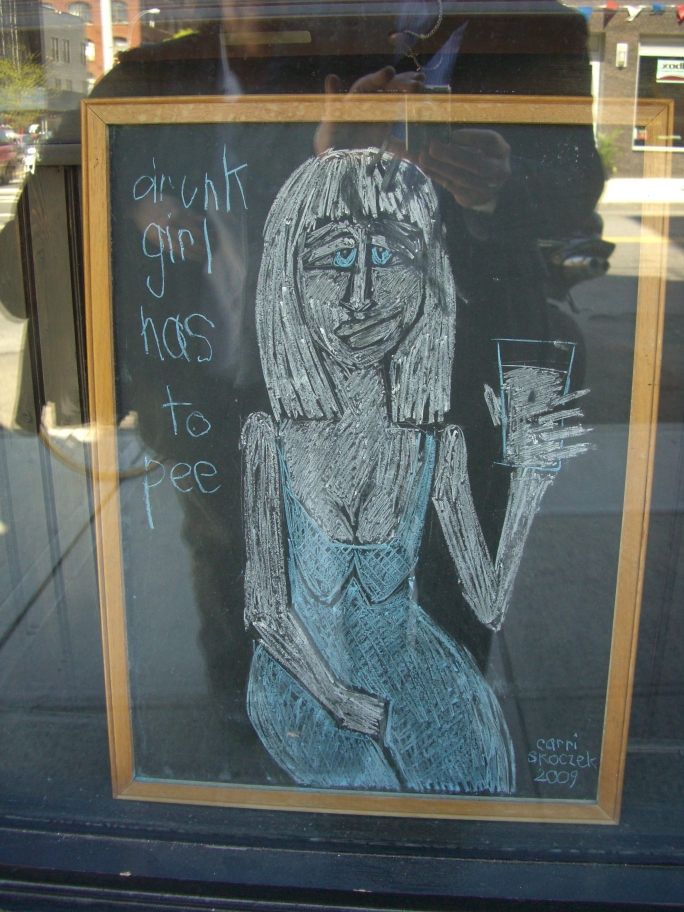 Carri did costumes and props for various shows Pawn lit, back in the olden days of doing lighting design in Milwaukee’s theatre scene. She moved to Brooklyn about 10 or 15 years back, but what are the odds that the first bar we walk into is her old haunt. “We all love her here. We don’t see her so much anymore, but yeah, she used to come in here a lot.” James tells us.

Before the visit is over, James has bought us a drink and we have absorbed countless interesting bon-mot from Thomas, a visiting artist who just needs to take a little of the edge off before returning to his commission for the last few strokes of work.

We finally drag ourselves out of Clem’s and head back to the management office for our keys, and a black car ride into the city, into Greenwich Village, to commence our visit to Manhattan. To our “Greenwich Village Love Nest” as the hosts chose to promote this two bedroom flat on Macdougal Street.

[X chimes in]
Our “love nest” is quite cozy — the beds divided by a new age frosted glass ‘bundling board’ and the toilet divided from the shower and sink in two separate rooms. Accouterments carefully accounted for…i.e. 2 forks per bed; 2 wine glasses per bed. How do they KNOW??? Went out to pick up the basics — fat, sugar and salt for me; wholesome items for Nic and booze for the both of us, then off to Kettle of Fish, Nic’s local here. Met up with MKE Library colleague for drinks and 3-D movies of the Mermaid Parade at Coney Island, the Blessing of the Animals at Cathedral of St. John the Devine and ‘Return to the World’s Fair’ all dutifully watched with goofy glasses and full glasses of libations of choice. The owner, Patrick, is from MKE and his wife Adrian indulges his foibles regarding the Packers, Brewers, and, apparently, thirsty visitors from the Heartland. Back to Macdougal abode and soon to bed — big day tomorrow!
[X drops back out]

It’s hard to believe, sometimes, that James Dean and Jack Kerouac used to drown their sorrows at the same bar where we bent many an elbow this evening past. We met new friends tonight, and introduced old friends to even older ones. The films were a blast, and a very studious audience was very glad that a venue exists which will show the New York Stereoscopic Society productions, all made by Messrs. Meredith and Smith, a careful duo with a canny eye and a dry editorial sensibility. We all appreciated their efforts, and their keen eye for pathos in the otherwise banal events they covered.