Pawn discovers that he has become disenfranchised by an act of Parliament and is none too happy about it, with the vote looming quick on the horizon. His heritage slowly leaking away, Pawn is prone to spasms of reflection and reminiscence. Meanwhile, more art by the basket is heaped down upon our intrepid travelers, a tyre palace from a past empire looms large, but does not ultimately lure.

The number 14, our trusty favourite bus, takes us down to South Kensington for an exhibit of Banksy at Andipa Gallery on Walton Street. Banksy doesn’t really lend himself to official shows, as he still maintains his anonymity, so little galleries like Andipa step into the void by gathering enough pieces from private holdings to put on shows and try to elevate the prices of those pieces which are in private hands. It is an art world rat race which is entirely a fiction created by those who stand to gain the most, the brokers, dealers and sellers. Banksy sees not a pound from this, directly, but it still does add to his myth, his mystique and ultimately his wallet, no doubt. The show was small, like last year’s, about twenty pieces in total. Some good, some redundant, all inimitably Banksy. Picked up the catalogue this time, couldn’t help myself. [in light of the “Riverwest anarchists” breaking windows of Whole Foods, etc., in Milwaukee, his screen print of a hooded figure about to hurl a bouquet of flowers {Love is in the Air} is appropriate.]

Then off to the Michelin Bidendem, a bizarre Art Nouveau temple on Brompton Road, just a short dash from Andipa. We had thought about eating there, but after checking the set price menu we demurred and stumbled on off to the Victoria and Albert to take in the exhibit “Hats; An Anthology by Stephen Jones” Here is X to comment on that:

So, as is so often the case of late, Nic is the only straight guy in sight at this special exhibit. A fantastic show of hats and headgear over the years, from Queen Victoria to Leigh Bowery, Audrey Hepburn to Madonna, from plastic rain hats {fancied by my Aunt} to “The Kiss of Death” – a feathered tunnel of a hat, black of course. 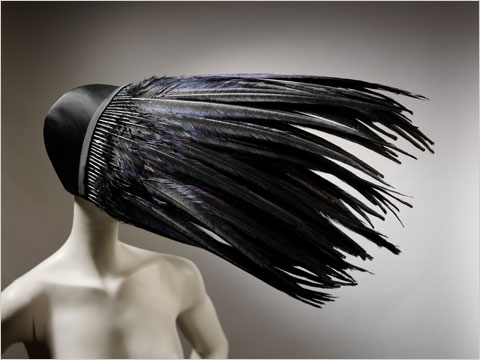 From there we toured, with a bored and indifferent group of “docents in training” the Theatre and Performance exhibit. Teeny tiny costumes worn by Mick Jagger, Adam Ant and Brian Eno were astonishing, at least in size. When you don’t care about jewellery or holy relics, you can save a hell of a lot of time at the V&A.

The plodding, exhausted masses yearning to drink tea I’ve encountered at so many museums here reminds me of “Shawn of the Dead”. I’m beginning to think Rick Steves is a cult leader (just sayin’). The necking French teenagers encountered around every corner probably have the right idea. After a costly (for Nic) stop in the gift shop, we went to the Science Museum and the “Listening Post.” 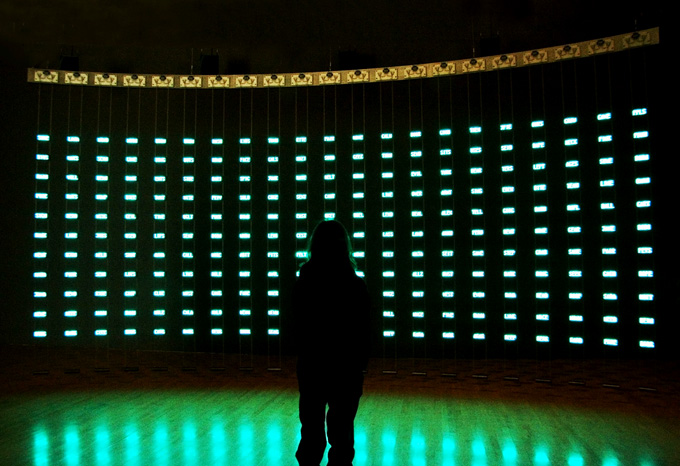 Regular readers may remember my visit to Listening Post last year. X was immediately drawn into its hypnotic spell, as it is the ultimate in textual voyeurism. I had to tear her away after a complete cycle, though, as we had other dates to make. Specifically we had to get back up to the Photographers’ Gallery in time for me to finalise shipping details for the Dryden Goodwin print I’ve purchased (yes, no willpower). That sorted, we shot back east on the tube, and relaxed a bit at home… had a lovely lamb and rosemary pie we bought at the market Sunday last.

Then, off to the theatre, the Young Vic, for Pictures from an Exhibition. This is one of the most difficult to describe shows I have ever seen, so I will toss it over to X:

Pictures from an exhibiton

OK, this is a smackdown, since this theatrical/dance piece choreographed to the music of Modest Mussorgsky is a definite one-off. After surviving the scrum at the door for our ill-defined seats, we found a pretty good vantage point for the story of composer Mussorgsky’s life told in dance to his composition, “Pictures from an Exhibition”. A highly physical and accomplished production (but the Brits should lose the freaking fog effects) tracing Mussorgsky’s life from birth (from an egg, according to his father) to his death by vodka and Mother Russia (in bear costume). Beautiful, strenuous dance and a poignant narrative made for a very moving experience. Noting the young, fashionable and enthusiastic Londoners queuing for the show left us both encouraged for the future of ambitious theatre here. So, home on the tube to the Mighty Goodge station and back to American Idol (concerned for our MKE friends in Gokey Gridlock) and adding to our already extensive collection of empty wine/liquor bottles. We have to carry these, in public, to a recycling bin in a square near us, and Pawn is already concerned. Me, hell, I’m used to it… – X

Well, X has done it up rightly, then, hasn’t she. Not much to add here, but a few observations:

Enough for now. We have nothing booked for tomorrow, yet, but there is much demanding our attention. Will write again,